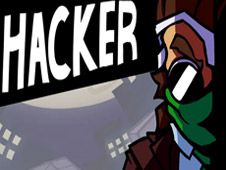 What is Friday Night Funkin: vs The Hacker Man?

Some Hacker Man tried getting into Boyfriend's account, so now our protagonist needs your help to defeat him and get his details back, something that you will do with what BF knows best, and that is music, so defeat this new antagonist on all the following custom songs developed for GJ Jam:

Show the Hacker Man that music is more than math, it's art!

Well, whether you face this new character in the story mode or free play mode, you've got the same goal of beating him by reaching the end of the songs, which only happens if you play all their notes correctly by following the charts.

To do so, press arrow keys at the same time as the arrow symbols above BF's head match one another, but be careful not to miss pressing them too many times in a row, since that will lead to you losing the game. Good luck, enjoy!