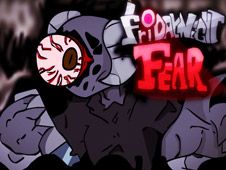 What is Friday Night Funkin vs Fear?

You should be frightened by Fear, since it is the embodiment of this feeling in one person, and, not only is he scary, but he is also a reputable battle rapper, one that you will have to help Boyfriend defeat so that he can finally get over any kinds of fears he has. This is a cool full mod that has three awesome songs for you all:

Defeat Fear itself through the power of music!

Whether you choose to battle Fear in the story mode or the free play mode, it does not matter, as your goal remains the same, and it is reaching the end of the songs by playing all their notes according to the charts.

How? Well, you will see arrow symbols floating around BF, and when they match with the symbols above his head, that is the exact same moment you have to press the same arrow key so that you hit the note properly.

Of course, if you miss hitting too many notes in a row, you will lose the game and have to start it all over again from scratch. We wish you all the best, tons of fun, and that you stick around here for even more fun to come!