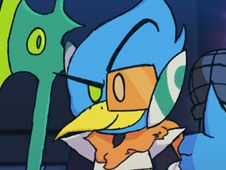 What is Friday Night Funkin vs BERDLY?

Characters from Deltarune have appeared before in our category of FNF Games, and since those mods were very well received, we are very happy that we've got a brand new one like that for you right now when we invite you all to play against Berdly, who you have to defeat on his one awesome song called Smart Bars!

Show Berdly who has the smartest bars in the rap game!

Hit the play button, as with one song, there is only one mode, and give it your best to hit all the notes of the song at the right time in the chart, so that you win the whole battle, which happens if you reach its conclusion.

Use the arrow keys for that, pressing the keys at the same time as the identical arrow symbols match above BF's head, but know that if you miss pressing them too many times in a row, you lose the whole game. Enjoy!