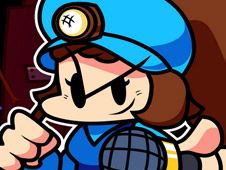 What is FNF vs Annalynn Mineshaft Mischief?

Annalynn is a character encountered by BF and GF in the arcade machine that they had been sucked into, and, now if they were to get back to their reality and escape it, they have to defeat her in a musical battle of rhythm, something that you will have to do right now and here on the following awesome songs:

Do you have what it takes to defeat Annalynn?

Whether you are playing in the story mode or free play mode of the game, you've got the same goal, and that is to reach the end of the songs by playing all their notes just how the charts tell you. How does that work? Well, you press arrow keys at the same time as arrow symbols above BF match one another.

If you reach the song's conclusion doing so, you win, but be careful not to miss pressing the keys too many times in a row, because that leads to you losing. Enjoy, and have fun as only here is possible!