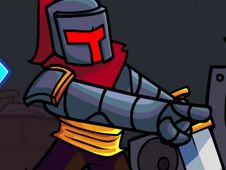 What is FNF: Soul Knight Funkin?

You can now help Boyfriend defeat, not one, but three characters belonging to the Soul Knight game series, with each character having their own song to play on, and, in case you are big fan of this series of games, there's no doubt that this game will become a favorite of yours, and so will the three songs:

Use music to defeat all the three Soul Knights!

It does not matter if you are playing the story mode or free play mode, you still have the same job to do, so reach the end of the songs by playing their notes according to the charts, and win!

To do this, watch for when arrow symbols above BF match one another and keep doing it because if you miss pressing the keys too many times in a row, you've got to start again from scratch.

Enjoy the game right now, and make sure to stick around for more fun to come!