FNF vs Jerry the Circle 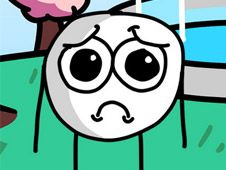 What is FNF vs Jerry the Circle?

You never know what kind of funny antagonists that Boyfriend will have to face off against in the musical rhythm game category of FNF Games, which is the reason why right at this moment you are all invited to have tons of fun with the new and interesting mod known as  FNF vs Jerry the Circle, where you battle this circle on the following custom songs:

Show us you've got a better rhythm than a literal circle!

Whether you go up against the Circle in the story mode or free play mode, your goal remains the same, which is playing the notes of the songs at their right time in the charts, so that you reach the conclusion of the song, turn the progress bar towards you, and win!

To play notes you use the arrow keys, having to press them at the same time as the arrow symbols above BF match one another, but be careful not to miss pressing them too many times in a row, or you will end up losing. Enjoy!