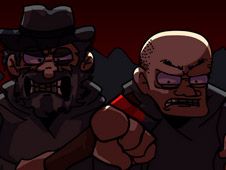 What is Friday Night Funkin’ Vs Ood?

Ood is known as the leader of the Society of Truth Believers, an evil-looking character with a top hat and an ax in his hands, one that Boyfriend must defeat in a musical battle of rhythm, in order to show him he is not joining his cult and to get away from him for good. This is an awesome full week mod featuring the following songs for you to enjoy:

Boyfriend VS Ood, a battle of music and truth!

You can choose to play this game in either the story mode, where you've got weeks where you have to complete a week by winning one song after another, or just go in the free play mode and pick any song from the list, and just have the battle, without any dialogues and cutscenes.

When arrow symbols above BF's head are matching with one another, you need to press the same arrow keys on your keyboard and keep doing so until the end of the song in order to win. If you miss pressing the keys too many times in a row, you lose, so be focused and not let it happen. Good luck!