FNF Vs Flowey (Your Bestest Friend)

FNF vs Link (Legend Of Zelda) 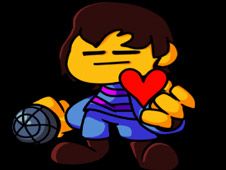 What is FNF: Frisk and Flowey Sings Power-Link?

Two cool new characters are now being introduced to you in the FNF Games universe, and they are none other than Frisk and Flowey, who come from the Undertale universe that has crossed over with this one quite a lot, and today the two of them are going to sing Power-Link, a famous song in the community, and we hope you will help them take it to the end!

A Frist and Flowey duet is what you need to make your day better, trust us!

When you see arrow symbols matching above the head of your character, that is when you have to press the same arrow keys on the keyboard, and you need to keep doing it until the end of the song in order to win.

Of course, focus so that you don't miss pressing the keys too many times in a row, because if that happens, you will be forced to start playing the game from the beginning of the song. Good luck!