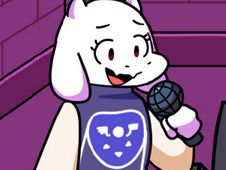 It's time to once more dive deep into the lore of Undertale through the rhythm games with Friday Night Funkin', as right at this moment you get to play against various new characters from this universe, different ones from those you already know, such as Flowey, Napstablook, Atoriel, and Toriel, which you will do on a series of awesome songs called:

Use music to defeat all the Undertale characters!

You can play the game in the story mode, with dialogues and cutscenes, or you can simply pick any songs from the free play mode, which can be great if you want a one-and-done.

When you see arrow symbols matching above BF's head you have to press the same arrow keys on the keyboard, and you have to keep doing it until the end of the song to win.

This means that if you miss to press the keys too many times in a row, you will lose the game and have to start it all over again from scratch. We wish you the best, lots of fun, and hope to see more of you here, of course!