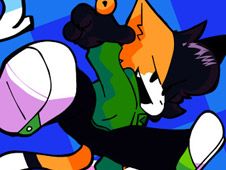 What is Friday Night Funkin vs Kauan V2?

Kauan is a Calico cat that you have battled before in our category of FNF Games online, but today he comes back with an updated mod that has two weeks, and also brings Kapi into the mix, a fan-favorite characters, all for a total of seven awesome songs for you all to enjoy, which are the following:

When Kauan and Kapi are together, only you can stop them!

You can play in either the story mode or free play mode but know that for Week 2, Kapi becomes the protagonist, instead of Boyfriend, and you can play the game in either the hard or easy levels of difficulty.

The goal remains the same, meaning that you have to reach the end of the songs by playing all their notes along the way to win. How? Press arrow keys at the same time as the identical arrow symbols match above BF.

Watch out not to miss pressing the keys too many times in a row, because if that happens, you lose and have to start again from scratch. Good luck!