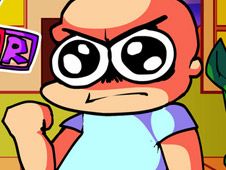 What is FNF vs Baby Blue Brother V2?

A baby with blue hair is not only BF's brother, but already quite a good musical talent, just like the other members of the family. Still, Boyfriend defeated him already in the first mod featuring him, which is why we are excited that he is now making his return to get revenge, as this mod has a whole new full week for you to enjoy, for a total of eight awesome songs:

It is your choice between the story mode and free play mode, and, after you make it, know that you have the same goal in both of them, which is playing the notes of the songs according to their charts, and winning once you have reached their conclusion.

Press arrow keys at the same time as arrow symbols above BF match one another. Be careful not to miss pressing the keys too many times in a row, because if that happens, you will have lost, and have to start again.

Good luck we wish you all right now, and we hope to see you around some more, it would be a shame not to keep the fun going!