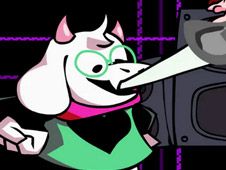 What is FNF: Ralsei with a fat blunt?

Ralsei from Deltarune is back, and she brought along not only a fat blunt but lots of awesome new songs for you to enjoy as well, which is why right now this mod was a must-add for us, and we are sure that you will give it your best and have tons of fun, with all of the following songs:

Defeat Ralsei once more, this time in an even more fun way!

The gameplay and your goals in this game remain the same for both the Story Mode and the Free Play mode, having the goal of reaching the end of all the songs by playing their notes according to their charts.

To do this, when arrow symbols above BF match with one another, you have to press the same arrow keys at the same time and keep at it until the end.

In case you miss pressing those keys too many times in a row, it will lead to you losing and having to start again from scratch. Good luck, enjoy!