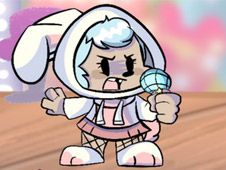 What is FNF: OC-Boardwalk Mod?

A brand new set of characters has come to challenge Boyfriend in this original creation od from FNF, and they do it from Week A to Week G, each of the weeks with new antagonists and new songs, with the total list of awesome songs featured here being the following:

Only you can defeat the Boardwalk characters in a rhythm battle!

Whether you are playing this game in the story mode or free play mode, the goal you have remains the same, and it is reaching the end of the songs by playing all their notes according to the charts, and winning once you reach that conclusion.

Be careful not to miss pressing the keys multiple times in a row, because if that happens, you will have lost and will be forced to start again from scratch. Good luck, enjoy!