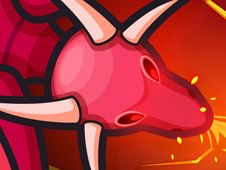 If you like games with magic, dragons, and other fantastical beings and things, while you are also a fan of multiplayer games online, then your day is about to be made, since right now and here we are delighted to invite you all to play the wonderful game known as Mageclash.io, where you get to have all that and even more!

Become the greatest mage in the world, right now!

Move your avatar around using the W, A, S, D keys, and use the mouse to attack or interact with things around you, such as weapons, upgrades, bonuses, coins, treasure chests, or anything else you might find useful.

Defeat the various monsters you encounter to raise your magical power and abilities, and destroy other players as well, but only aim for those ranked lower, since stronger opponents will take you out instead.

As you proceed and make a good job while surviving, you will be able to acquire new gear for your avatar, change his look, while also improving his various stats.

Start by choosing the name you want to be known as, and then give it your best, as only here is possible!