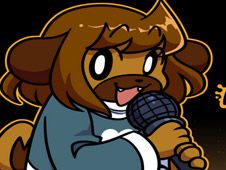 What is Friday Night Funkin vs Coco?

Coco is a pug girl who is also really good at music, and she is now going to have a really awesome rap battle against Boyfriend, whom you are going to control, and we're sure you will be having quite an awesome experience together since the songs featured in this mod are as awesome as they are:

Have a great musical time with the cheerful Coco!

From the game's main menu you will pick between the story mode and free play mode, and then give it your best at either to play the notes of the songs at the right times in their charts, because when you reach the end of said songs, you win!

To play notes you need to use the arrow keys, keys that you press at the same time as the identical symbols are matching above BF's head. Don't miss pressing the keys too many times in a row, or you lose. Good luck, enjoy!