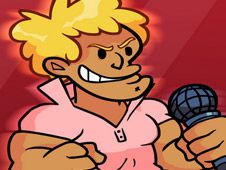 What is Friday Night Funkin’: Vs Brody Foxx?

Brody Foxx is the animated host of the cartoon show known as Yo Mama, which is known for making a lot of jokes with this premise, who has now ventured into the world of rhythm battles, and has made a mistake challenging you and BF because we are sure that right now you will beat him on the following songs:

Show Brody that being good at music is better than being a bro!

As in all the other reaction time games of this category, watch for when arrow symbols above BF match with one another, and, at the same time, press the same arrow keys from the keyboard until the whole song ends, and you win!

Of course, if you miss pressing those keys multiple times in a row, you will lose the whole game and have to start again from scratch, something we don't want for you, as we want to see you win!