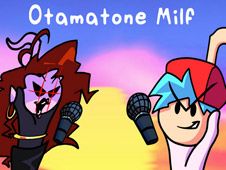 Have some Otamatone fun with Boyfriend and Mommy!

After picking between the story mode and free play mode, give it your best to reach the end of the song by playing all of its notes according to the charts, since that is the only way you win because if you make too many mistakes along the way, you are going to lose.

To hit notes in this kind of game, arrow symbols will match above BF's head, and you will have to press the same arrow keys at the same time. Not doing so counts as a miss, so don't rack up too many misses if you don't want to lose. Good luck, have fun!