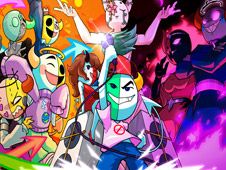 What is Friday Night Funkin: vs IvnyRose?

Pigeon, Artemis, and Justice are three new characters that you and Boyfriend will have to face off against in a rhythm battle on our website, something we've got no doubt at all you will have tons of fun with, since the FNF IvnyRose, despite still being just a demo, has quite a lot of awesome songs for you to love playing:

After selecting between the story mode and free play mode in the main menu, give it your best to reach the end of the songs by playing all their notes according to the charts, something we will clearly explain right now!

When arrow symbols match above BF's head, you will have to press the same arrow keys on your keyboard, since that is how you hit the notes appropriately.

If you get the timing wrong and miss notes too many times in a row, you will lose and have to start again, so focus hard not to let that happen for anything in the world!