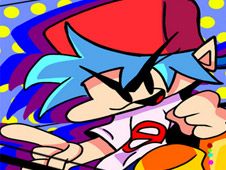 What is Friday Night Tootin?

One of the coolest remakes of FNF to have come around recently on our website is definitely that of Friday Night Tootin, where some familiar faces might return to beat up Boyfriend in a rhythm battle, and while their designs might change a bit since this game looks much more cartoonish, the most vibrant change is that of the various exotic instruments that the antagonists will have in their hand.

This is a game with a total of five awesome weeks:

Toot it out with Boyfriend and his musical rivals!

After you have decided between playing the game in the story mode o free play mode, either way, give it your best to reach the end of the songs by playing all their notes according to the charts, since only then do you win, as missing to hit too many notes in a row leads to you losing the whole game.

To do this, when arrow symbols above BF match, you have to press the exact same arrow keys, simple as that. Be careful not to miss pressing the keys too many times in a row, as we've said. Good luck, enjoy!