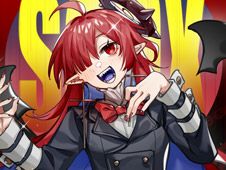 What is FNF vs SanX?

Boyfriend stumbled into the apartment of SanX, a vampire girl, so, now, the only way he gets out of there with his life intact, and all his blood, is if he were to win the music battle against her, which we are sure you will find to be very fun, as you go up against one another on four awesome songs:

You will choose between the story mode and free play mode of the game, having the same purpose in both, which is reaching the end of the songs by playing all their notes according to the charts, since that is how you win.

To do this, when arrow symbols above BF match one another, make sure to press the same arrow keys from the keyboard but know that if you miss doing it too many times in a row, you lose. Good luck, enjoy!