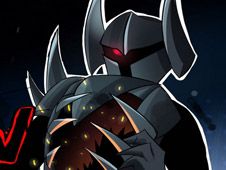 What is FNF vs Forsaken?

Forsaken is a furious warrior that looks like a combination between a demon and a knight, and it has challenged Boyfriend to a musical battle, one on a song known as 'insanity', which makes sense, since the character is quite insane himself, and we hope that you will banish him away by winning the musical battle!

Defeat Forsaken to escape his horror!

As the song progresses, when it comes to your turn to sing, you will see arrow symbols float and match above BF's head. When they do, press the same arrow keys from the keyboard, so that you hit that note in the chart. Keep at it until the song ends to win, because if you miss hitting too many notes, you lose, and have to start again from scratch.

Good luck to everyone, and we hope to see you here all day long since more awesome games with FNF are coming!