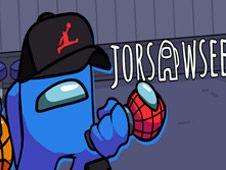 What is FNF VS Jorsawsee?

Jorsawsee is quite the unusual imposter from Among Us, which is maybe why he is now featured in our FNF Games category! He is a red and blue imposter who is a really big fan of basketball, as it is quite clear from his outfit. You and BF will now have to take him on in a musical battle on the song known as 'lotowncorry'.

Defeat yet another imposter in a rhythm battle from Friday Night Funkin'!

You simply have to hit the play button to start, and then you need to sing all the song's notes when your turn comes at the right time, taking the song to its conclusion to win because if you miss playing too many notes in a row, that leads to you losing.

You will use the arrow keys to hit notes, pressing them at the same time as the identical arrow symbol matches above BF's head, simple as that. Good luck, and enjoy!