FNF VS Minus Annie 2

FNF vs Minus Annie 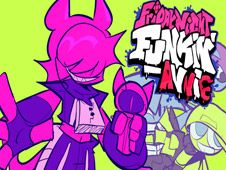 What is FNF vs Minus Annie?

Annie is quite a popular character from the FNF world, but one we have not seen here in a while, which is why we are very happy to see her make a return today, and, even more so, she does so in a brand new form, the minus form, meaning that she looks just like her icon, and so does Boyfriend, with the two of them now duking it out on the following custom songs:

Minus Annie is here, so defeat her!

Whether you face her in the story mode or free play mode, the goal you have is the same, and it is to reach the end of the songs by playing all their notes according to the charts.

To do this, watch for when arrow symbols above BF match with one another and press the same arrow keys from your keyboard to hit that note.

Be careful not to miss pressing too many of the keys in a row, since that leads to you losing and having to start again. Enjoy, and stick around for even more of our awesome new games of the day!