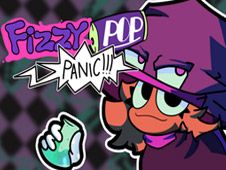 What is FNF vs Emmi (Fizzy Pop Panic)?

Emmi is a witch whose magical powers don't help her at much other than making great cola, although we would think that is a great power to have, even more so if you are a big fan of this soda, making juice is not what you will do in this brand new game, but instead make some music, as together with her and BF you will sing and play some awesome custom original songs:

Have a cola-tastic music battle with Emmi, the witch!

Whether you face this fresh character in the story mode or free play mode, the goal you have is the same, and it is reaching the end of the songs by playing all their notes according to their charts. To do this, you watch for arrow symbols to match above BF's head, and at the same time press the same keys from the keyboard.

Don't miss hitting too many notes from the charts, since too many mistakes in a row will lead to you losing and having to start the game again from scratch. Enjoy!