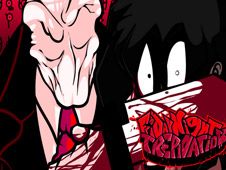 What is FNF: Friday Night Trepidation?

FNF Games with Creepypasta are simply the best for this time of year since it is Halloween month, and our team is delighted right now to share with you the Friday Night Trepidation mod, an awesome mod where you get to go up against three characters, and you do it on a total of ten, yes, TEN awesome songs, such as:

After choosing to face these characters in either the story mode or free play mode, your goal is to reach the end of the songs by playing all their notes according to the charts, since only then do you reach the conclusion because if you miss too many notes in a row, you end up losing.

To hit notes you use the arrow keys, so watch for when arrow symbols above BF match one another and press the very same key. Misses meaning when you press a wrong key, or press the correct key but at the wrong time. Good luck, enjoy, and stick around for even more fun to come, guaranteed!