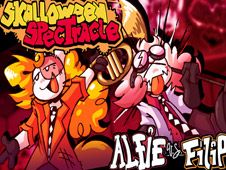 Alfie and Filip are throwing a Halloween show, a musical one, of course, where the two of them will battle it out on a few spooky songs, original ones made just for this awesome mod:

Have a musical Halloween with Alfie and Filip!

Watch for when arrow symbols match above your character's head, so that at the same time you press the very same arrow keys, which is how you hit the notes. Keep at it until the song ends to become the winner.

Be careful not to miss pressing the keys too many times in a row, because if that happens, you lose and have to start again from scratch. Choose between the story mode and free play mode, and then give this game your best, having tons of fun!