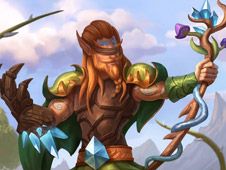 What is Firestone Expansion: Warfront?

We love that right now on our website we could bring forward for you all one of the best Idle RPG Games online on the internet, and it belongs to the popular series of Firestone Games, with this new iteration being called Expansion: Warfront, which is a great entry point even if you're brand new to the series!

Expand and win the battle of the warfront!

The game is set in the world known as Alandria, where there's a constant battle going on between Orcs and Undead, and this war is bringing destruction to the land, which is why you need to use the power of the firestones to stop them!

What this new expansion brings to the table is the class of warriors known as engineers, as well as new battles and campaigns that you can undertake. Also, you have new war machines that were added to the battle system.

If you open up jewel chests, you can add them to the equipment of your warriors to make them stronger, and you can buy them from the exotic merchant.

Try to win each battle and campaign you take part in, land into the hall of heroes, and climb the rankings of the leaderboard, until you become one of the best players in the fantasy world. Have fun, what are you waiting for?