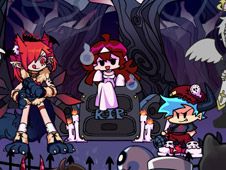 What is FNF: Halloween Night Funkin?

It's a bit late, but FNF Halloween Games are still welcomed on our website, no doubt about it, which is why we are very happy that at this moment we can share with you the awesome game known as Halloween Night Funkin, where Boyfriend and his musical foes will put on quite the show for this holiday, on stage, with the following songs:

Have a musical Halloween to never forget!

After choosing between the story mode or free play mode, in either case, the way to win is by reaching the end of the songs by having played all their notes. To do this, watch for when arrow symbols above BF match, and press the identical ones from the keyboard.

Know that if you miss doing that multiple times in a row, that leads to you losing the whole duel and having to start again, so be careful not to let it happen. Enjoy!