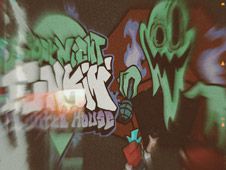 What is FNF Haunted House?

After entering a haunted house on a dare for Halloween, Boyfriend encountered all sorts of ghosts, monsters, and other creatures, so you now have to get rid of these demonic presences by defeating them through rhythm battles, something we invite you to do right now, and you do it on all these awesome songs:

Escape the haunted house through the power of music!

After choosing between the story mode and free play mode, where you can battle various characters, know that the way to win remains the same in both cases, and it is by reaching the end of the songs by having played all their notes. How?

Well, when you see arrow symbols match above BF's head, you have to press the identical arrow keys from the keyboard, but you should be careful not to miss doing it too many times in a row, or you lose the whole game.

Good luck, we want to wish you all the best, and hope you stick around for more fun to be had!