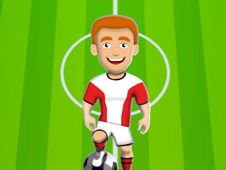 What is Battle Soccer Arena?

When it comes to soccer games online, we always want to make sure that we bring over the best of them for you, which is the reason why right at this moment you are invited to have tons and tons of fun with the game known as Battle Soccer Arena, where the sport of football turns into a whole fight and war, making it even more exciting than it already is!

Win the battle of soccer!

You can play by yourself against the CPU, or there can be up to six players at the same time, with a three-on-three match which will be really incredible, no doubt.

After choosing the number of players, and if you want to use the boost and bombs or not, pick the national team that you want to represent in the tournament.

Before the time of the match runs out, score more goals than the opposing team to win, with there being three soccer players for each team, and if you're working with real players, co-operate!

Use the arrow keys to move, space to pass, shoot, or tackle. Good luck to each of you, and don't stop here, since we've got the best football games on the internet on our website, so checking them out should be a must!