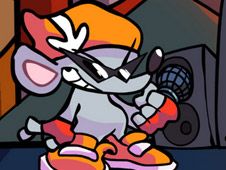 What is FNF vs Ritz?

Ritz is a cool and hip mouse who is also quite a skilled rapper, which is why he and Boyfriend are going at it in a battle right now, a musical battle that you have the chance to take part in as well right now by playing this mod, where you will have your duel on the following songs:

Boyfriend Vs rat, who's got the better musical chops?

Whether you fight this character in the story mode or free play mode, the way to win is by reaching the end of the songs and playing all their notes according to the charts, because if you miss playing too many notes correctly in a row, you end up losing and having to start again from scratch.

As for how you hit the notes, you watch for when arrow symbols match above BF's head, and at the same time press the identical arrow keys from the keyboard. Good luck, we wish you tons of fun, and we hope to see more of you here today, as with any day, for that matter!