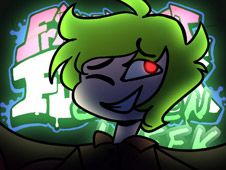 It's not always green in the rap battle world, but right now it's going to be fun, guaranteed!

Whether you choose the story mode or free play mode, the way to win is the same, and it is by reaching the end of the songs, which you do by playing all their notes according to the charts.

To do this, you watch for when arrow symbols above BF match one another and press the identical arrow keys. Make sure not to miss doing that multiple times in a row, because you will end up losing. Enjoy!