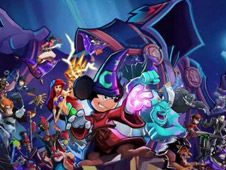 What is Disney Sorcerer's Arena?

We've not seen many games featuring both Disney characters and Pixar characters all in one, for an RPG adventure game like today's Disney Sorcerer's Arena, where these characters that you love so much become wizards and witches that have to use their magical powers to defeat the forces of evil!

Become Disney Sorcerers and save the animated world!

Among the heroes that you can become or which are going to join your fight, we have Mickey Mouse, Ariel, Simba, Aladdin, having to deal with classic villains such as Jafar, Ursula, Scar, and more!

The characters will face off against various enemies, and with the mouse you will decide the magic spells, attacks, and defense techniques that they are going to use against these enemies, having to defeat them to advance the story.

As you defeat enemies, you gain experience and are able to raise the level of your characters, which is good, because the enemies you meet and fight down the line will be stronger each time.

The stronger your characters, the more awesome abilities you will be able to use, as well as unlock new clothes and character designs to make things more interesting.

Start your magical Disney adventure right now, and don't hesitate to invite your friends over for fun as well, we're positive they will enjoy this game from start to finish!