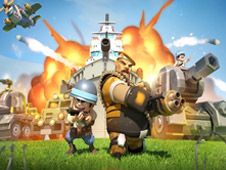 What is Top War?

It is always a really fun time to be playing war games with soldiers and tanks, especially if they are really high-quality ones like the one we are delighted to share with our visitors right now, the Top War game, where strategy, endurance, bravery, and skill is what you need to win on the battlefield and outside of it, and lead your nation to victory!

Be the top dog of war and win it!

This game combines elements from our modern age and which are inspired by the two World Wars, such as tanks, helicopters, soldiers with guns, but there are also fantasy and magical elements, such as towers with electric lightning made with magic, or the enemies you face off against, the Dark Empire and their Legion of demonic beasts.

You will have to survive each wave of attackers coming to take your territory by placing defensive towers and artillery, using various powerful heroes on the battlefield to lead your troops, and you should always increase the number of soldiers you have so that you can deflect any kind of attack.

For each wave of enemies you survive, you will be rewarded, allowing you to upgrade your towers, defenses, heroes, soldiers, and weaponry, so make sure to do it and be ready for the next wave. Do you get what it takes to win the war? Try the game right now and find out!