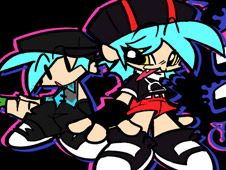 What is FNF vs Beepie?

While Boyfriend and Girlfriend were at an anime expo, which is not surprising, as they love Japanese cartoons, which is when Beepie showed up, BF's biggest fangirl, who is now challenging her idol to a musical duel, something you will do on the following songs:

Whether you choose to do this in the story mode or free play mode, it does not matter, as the way to win is the same, and it is by playing all the notes when your turn to do so comes and reaches the end of said songs.

So, when you see arrow symbols match above BF's head, press the identical arrow keys from the keyboard, since that is how notes are played. If you miss doing that multiple times in a row, you lose, so be careful and not let it happen! Enjoy, have fun!