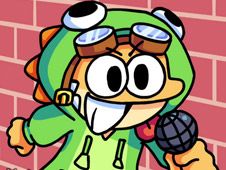 What is FNF vs Amphibro?

Amphibro is a frog that acts like a frat dude, and can sing and dance really well, which is why he became the latest antagonist that Boyfriend has to face off against for musical supremacy, and you're here to help our protagonist, as always, so defeat this character on the following songs:

Defeat the amphibian at music! Can you do it?

Whether you choose the story mode or free play mode, the way to win is identical, and it is by reaching the end of the songs, which you can do only if you play your notes when your turn comes. To do this, when the floating arrow symbols match above BF's head, press the identical arrow keys yourself.

That is how the notes are played, but if you miss to do it multiple times in a row, you lose and have to start the game again from scratch, so be careful and not let that happen!