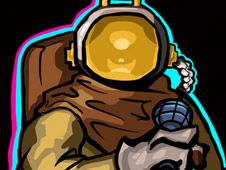 What is FNF vs Hactling (Outer Wilds)?

Here it is, the first crossover between Friday Night Funkin' and the Outer Wilds game, where Boyfriend has to battle a character from it, an astronaut who goes by the name of Hactling, whom you have to beat on three really awesome songs named:

Use music to defeat the rugged astronaut!

After making a choice between the story mode and free play mode of the game, give it your best to reach the end of the songs in either, since that is how you win, and to achieve that you need to play their notes when your turn comes at the right time.

This means that when the arrow symbols that float from below BF match above his head, you will press the identical arrow key, but if you miss doing that multiple times in a row, you lose and are forced to start again all over from scratch. Enjoy, good luck!