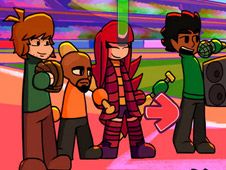 What is FNF vs. Wii Sports Guests?

Maybe you've gotten tired of the many FNF Wii Sports mods that you've played so far to only feature Matt, which is why today we brought over for you one where you go up against the guest characters featured along the years on the platform, in sports such as boxing, tennis, or baseball, and you will defeat them on three songs:

It's Wii music time once again!

After choosing between the story mode and free play mode, no matter your pick, give it your best to reach the end of the song you are playing on, since that's how you win, and to do so you have to play all the notes according to the charts.

This means that when you see arrow symbols match above BF's head, you have to press identical arrow keys from the keyboard. Don't miss it multiple times in a row, because you will end up losing. Good luck, enjoy!