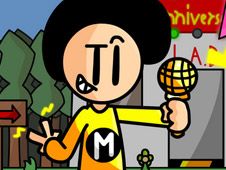 What is FNF Vs Miguel?

Miguel is the latest wacky character that you and Boyfriend will have to defeat in a rhythm battle, something we invite you to do right now to have tons of fun with, where you go up against this fresh character on four awesome songs:

Do you have what it takes to face and win against Miguel?

Whether you decide to play in the story mode or free play mode, the way to win is the same, and it is by reaching the end of the songs, which in turn you can only do by playing all their notes according to the charts.

This is done by pressing arrow keys at the same time as the identical arrow symbols are matching above BF's head, but if you miss doing it multiple times in a row, you lose, something you should not let happen for anything in the world. Good luck, enjoy!