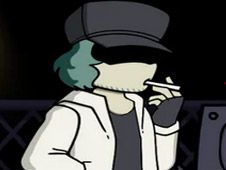 What is FNF Vs Garcello Timeskip?

It has been quite a long time since Garcello and Boyfriend had their rhythm battle, and after his utter defeat, the smoker went away and changed himself a ton, as he now no longer smokes, but only licks on lollipops. Whether one is more healthy than the other, that's not the point of this game, but the two are now having their rematch, so you are here to help BF defeat this character once more, on new songs:

Defeat the new and improved Garcello, just like in the past!

Whether you pick the story mode or free play mode, the way to win is the same in both, as you need to reach the end of the songs by playing all their notes according to the charts, so when you see arrow symbols match above BF, press the identical arrow keys, since that how notes are played.

If you miss doing it multiple times in a row, you lose and have to start again from scratch, so be careful not to let it happen. Good luck, and all the best we wish you, as usual!