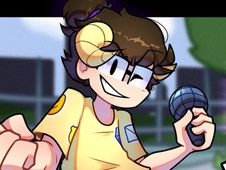 What is FNF vs Sulayre (Creative Burnout)?

We really love to see mod creators from the Friday Night Funkin' Games world get their own mods where they become characters for Boyfriend and you to defeat, just like it is the case today with Sulayre, the creator of the Vs Matt mod, as well as many other cool ones, who you will now face on quite a bunch of great songs:

Show no burnout in your musical skills and win the fight!

After choosing between the story mode and free play mode, give it your best to reach the end of the songs by playing all their notes, since that is how you win, but make sure not to miss multiple notes in a row, because if that happens, you lose and have to start again from scratch.

When you see arrow symbols float and match above BF's head, press the identical arrow keys to hit the notes, but pressing them too early, too late, or the wrong key counts as a miss. Good luck, enjoy!