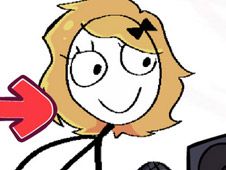 What is FNF vs Derpina?

Derpina is the stick character meme that used to be very popular a few years back, and it was the female counterpart to Derp, and while these memes might have gone out of style recently, they are still fondly remembered by many, with some of them being FNF mods creators that have now put her as an antagonist for you and BF to defeat, something we invite you to do on the following songs:

Show us you're not a derp when it comes to music!

After making your choice between the story mode and free play mode, play your notes in the songs at their right time in the charts, all the way to the end of the songs in order to win.

This means that when arrow symbols above BF match one another, you will press the identical arrows from the keyboard, but missing to do that consecutive times in a row makes you lose. Good luck, have fun, enjoy!