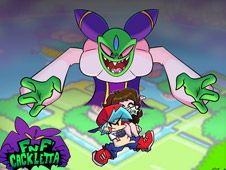 What is FNF vs Cackletta?

Cackletta is an evil witch and an antagonist coming from the world of Mario Games, who you and Boyfriend will now have to get rid of through the power of music, something you will do on a few custom songs such as:

Only music can banish the evil witch!

After choosing between the story mode and free play mode, aim to win by reaching the end of the songs, which you do by playing all their notes according to the charts.

This means that you watch for when arrow symbols are matching above BF's head, and press the identical arrow keys at that exact same time.

Don't miss doing it multiple times in a row, because that leads to you losing and having to start again from scratch. Good luck to all players, and have fun!