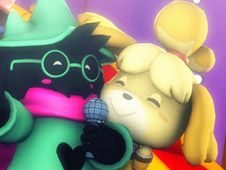 What is FNF: Singing with Ralsei (Friday Night Fluffin)?

Ralsei becomes a full-time antagonist for the first time in our category of FNF Games, something we are very happy for, since he had always been a fan favorite, and now you get to face this character on six songs, in two awesome weeks:

Let's have a fluffy good time with Ralsei and great music!

This means that when you see the arrow symbols float and match above BF's head, you need to press the identical arrow keys from the keyboard.

Make sure not to miss hitting the keys multiple times in a row, since that leads to you losing. Good luck and all the best we wish you all, as usual, and we invite you back as soon as possible!