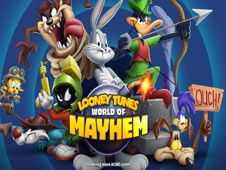 What is Looney Tunes World of Mayhem?

There are few cartoons as chaotic, fun, and crazy as Looney Tunes has been over the years, which is why this new game called World of Mayhem does not surprise us at all, as it manages to bring a system of one-on-one fighting (brawl games) into the universe, creating quite the unique experience, no doubt about it!

Save the Looney Tunes World from Mayhem!

The story goes like this: Martian Manhunter is set on invading Earth and terminating its population for the Martians to take over, so only the LT gang can save the day, with characters such as Bugs Bunny, Daffy Duck, Taz Devil, Road Runner, and others, teaming up to battle the invading forces.

The action: You will have one-on-one battles against various foes, with the game being a turn-based battle game where you use the mouse to select the attack and defense moves you want to make, after which the opponent does their move, and so forth. Win by completely depleting the enemy's health bar before they can do that to you first!

The rewards: Unlock new characters to use in battles further down the story, with all sorts of crazier attacks and moves being unlocked as well. Oh, and, of course, you save the world, who does not want to do that?

Let all the fun begin right now, and make sure to invite your friends along too, we have a bet they will love it here!