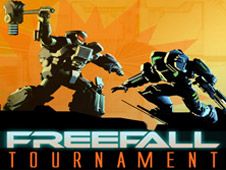 What is Freefall Tournament?

Freefall Tournament is certainly going to be found as one of the best new action and fighting games of our website to have been added lately,  by our visitors, which is why we could not miss the chance to share it with you all, especially after we've had such a tremendous time with it ourselves!

Enter and win the Freefall Tournament, can you?!

The game is set in space and the various soldiers that you can become are going to be called space marines, with you taking part in various battle royale matches against players from all over the world. There are multiple heroes you can become here:

Of course, each of them comes with their own specific suits, as well as abilities and special powers, and you can always improve upon their stats by using the experience points you win in-game, and with the money, you earn you can go to the shop in order to buy new weapons, gear, and make yourself stronger for further battles.

Register yourself, or play as a guest, and give it your best to win as many space wars as possible, and become one of the game's top-ranking players. As for the controls, they are as follows: WASD to move, mouse to aim and shoot, space to jump or use jetpack, shift for gravity boots, E to jump or use shield skills, F for bombs, R to reload, numbers to switch weapons. Good luck, enjoy!