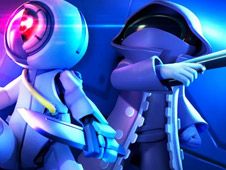 What is Super Sus?

Things appear to be Super Sus in one of the best Among Us-inspired games online to have been added on our website, something we are sure you immediately thought about when seeing the title and image of the game, and this fan-made game might be just as good as the original, so trying it out right now should be a must!

Don't get caught being super sus and destroy the ship!

In addition to the game, it had been inspired from, the designs of the characters featured here are more diverse and more realistic at the same time, which is the first thing you notice, no doubt.

If you are a crew member, your goal is to go around and fix the damage of the ship, with some of it having been caused by the imposters, another role you can play.

If you are a saboteur, you will need to damage the ships' systems in order to bring it down, while also killing other players without getting caught. Use the mouse to move around.

Nine players enter a ship, all suspicious of one another, and we hope that you come out on top of them all as the winner, no matter the role you play. Enjoy!