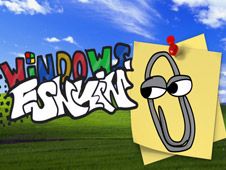 What is FNF: Windows Funkin’ VS Clippy?

Windows Funkin' Vs Clippy is the newest FNF mod to feature this classic character that you might know if you had some of the older Windows operating systems installed on your computers, with him meant to be an assistant to the Office programs, but other apps in the system as well. This isn't his first mod here, but this one features him as an antagonist on two new tracks:

Let's have a windows funkin' good time against Clippy!

Whether you are playing in the story mode or free play mode, the only way to win is if you reach the end of the songs by playing all their notes according to the charts. This means that when you see arrow symbols matching above BF's head, you will press the identical arrow keys.

Be careful not to miss doing that one note after another, because if that happens too much, you lose and are forced to start again from scratch. Good luck, we wish you all the best!