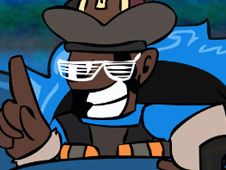 What is FNF vs Demoman: You Can’t Pan?

Demoman from Team Fortress 2 has now arrived in the world of FNF Games, where you and BF are invited to defeat him on the tunes of two really awesome custom tracks:

Let's defeat Demoman with the power of music!

Whether you play in the story mode or free play mode, the way of winning remains the same, by reaching the end of the songs, which only happens if you play all their notes according to the charts, so watch for when arrow symbols match above BF's head and press the identical arrow keys at the same time.

Know that if you miss hitting the keys multiple times in a row, you lose and have to start again from scratch. We wish you good luck, all the best, and hope to see you around some more, fun never stops here!