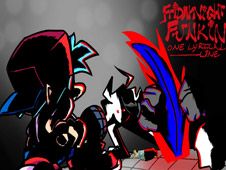 What is Friday Night Funkin’: One Lyrical Line?

Boyfriend faces some of the most peculiar antagonists in the world of FNF, just like it is the case today, where you help him defeat a bunch of lines and other shapes, some of them random, some of them forms of art, with this awesome game having plenty of amazing songs for you all to enjoy:

Let's use music against the shapes, the lines, and the art!

Whether you play the story mode or the free play mode, you achieve victory in the same manner, which is by reaching the end of the songs, and this only happens when you play all your notes according to the charts.

So, when you see arrow symbols matching above BF's head, press the identical arrow keys, but be careful not to miss doing that too many times in a row, or you lose the whole musical battle. Good luck, enjoy!